Install the app
You are using an out of date browser. It may not display this or other websites correctly.
You should upgrade or use an alternative browser.

The GT/CS was the very first Limited Special Edition Mustang ever offered by the FoMoCo: Not only the first one, but easily one of the most desirable and significant Special Limited Edition Mustangs ever to roll off the FoMoCo assembly line. Any GT/CS is a sought after and desirable collector car today as only approx 4,000 were produced, and only a precious few of those received the potent GT390 drivetrains.
The GT/CS design is founded in the SHELBY AMERICAN lineage: In 1967 Shelby American produced a prototype GT500 S/C “Super Coupe” based on a 390-GT “S” code coupe Mustang nicknamed “Little-Red''. Shelby American had a desire to add a coupe to the Shelby line for 1968 but production limitations made that an impracticality. FoMoCo capitalized on the vision for the Shelby GT500 S/C "Super Coupe" and produced their own Shelby inspired coupe utilizing Shelby’s design and American Shelby production parts. The GT/CS was created as a promotional marketing tool aimed at the Southern California car market calling it the “California Special”. The purpose was to showcase how a Mustang could be ordered directly from the factory from “mild to WILD”. And clearly this High Output GT390 big block with the GT/CS Shelby appearance package option with its integrated rear spoiler, side scoops, stripes, special grill, hood locks, special tail lights, etc was on the wild side of any 1968 factory produced car at that time!
This 390GT/CS is a very rare TRIPLE GT MUSTANG!!! Only a true GT/CS coupe can become a TRIPLE GT by possessing all three GT options; GT390-4V S code powertrain + GT Heavy Duty suspension and handling package + GT/CS California Special Shelby-appearance package. Since the 390GT with GT heavy duty suspension Mustang was the base platform needed from Ford and utilized in the building of all the GT500 Shelby's, by adding the Shelby body parts to the coupe by way of the GT/CS Shelby appearance package, you had the base foundation and DNA of the Shelby GT500 SC. Shelby may not have built his GT500 Super Coupe, BUT Ford Motor Co came exceedingly close if you ordered the right options together. My personal opinion is that the GT/CS Shelby appearance coupes were among the best looking Mustangs ever produced.
Only approx 24 TRIPLE GT-GT390-GT/CS Limited Special Editions Mustangs were produced. A true triple 390GT/CS is about 100 Xs more rare than a 70 Boss 302 & about 25 Xs rarer than a ‘69 Boss 429. Now that is rare!
This particular 390GT/CS was a special order Dealer Promotional Vehicle. According to the Marty Report this 390GT/CS was specially ordered directly by and for the Sutton-Brock Ford/Lincoln/Mercury Dealership in New Mexico. Since they held on to this for a few months before selling it, it is likely this was used as a promotional vehicle.
The Meadowlark Yellow color of this 390GT/CS Mustang is significant as it was also the color used by the Shelby/Ford TERLINGUA Racing Team: Shelby-Terlingua racing team was the reigning ‘67 SCCA Trans-Am series Champion. No doubt the ‘67 Shelby Terlingua Race car was the inspiration for this special order High Performance Mustang which at the time was as close as you could order from FoMoCo in color, appearance and performance to the actual Shelby Racing Championship winning race car. Truly this is a visionary vehicle, even a FORESHADOWING of the Trans Am series Boss 302 which soon followed in 1969!
outstanding survivor! The original benchmark condition of the undercarriage and various aspects of this 390GT/CS validates that: [a] it resided in one of the driest USA climates, always garaged, [c] never driven in bad weather, [d] never abused [e] the low miles [f] always rust free. 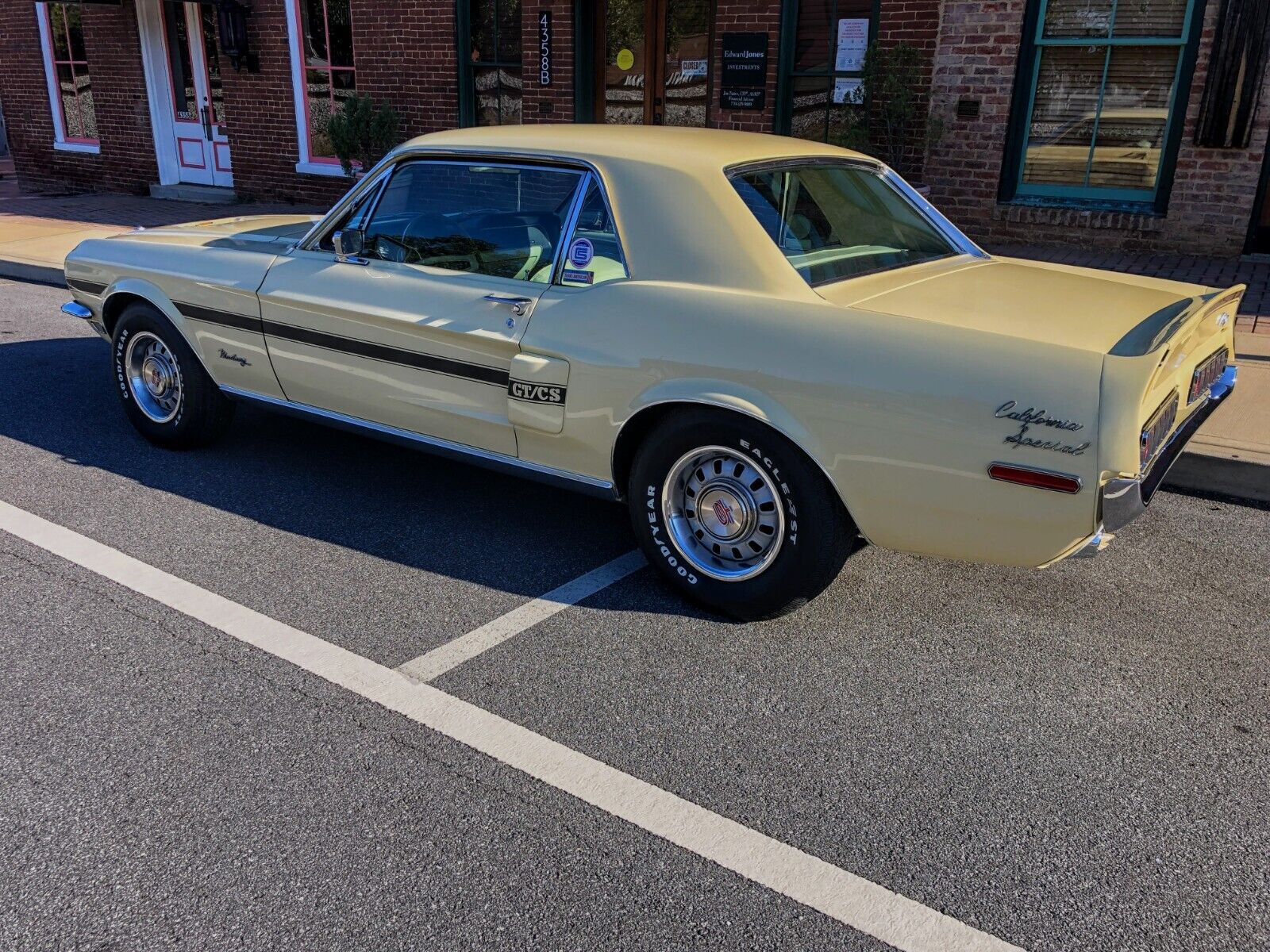 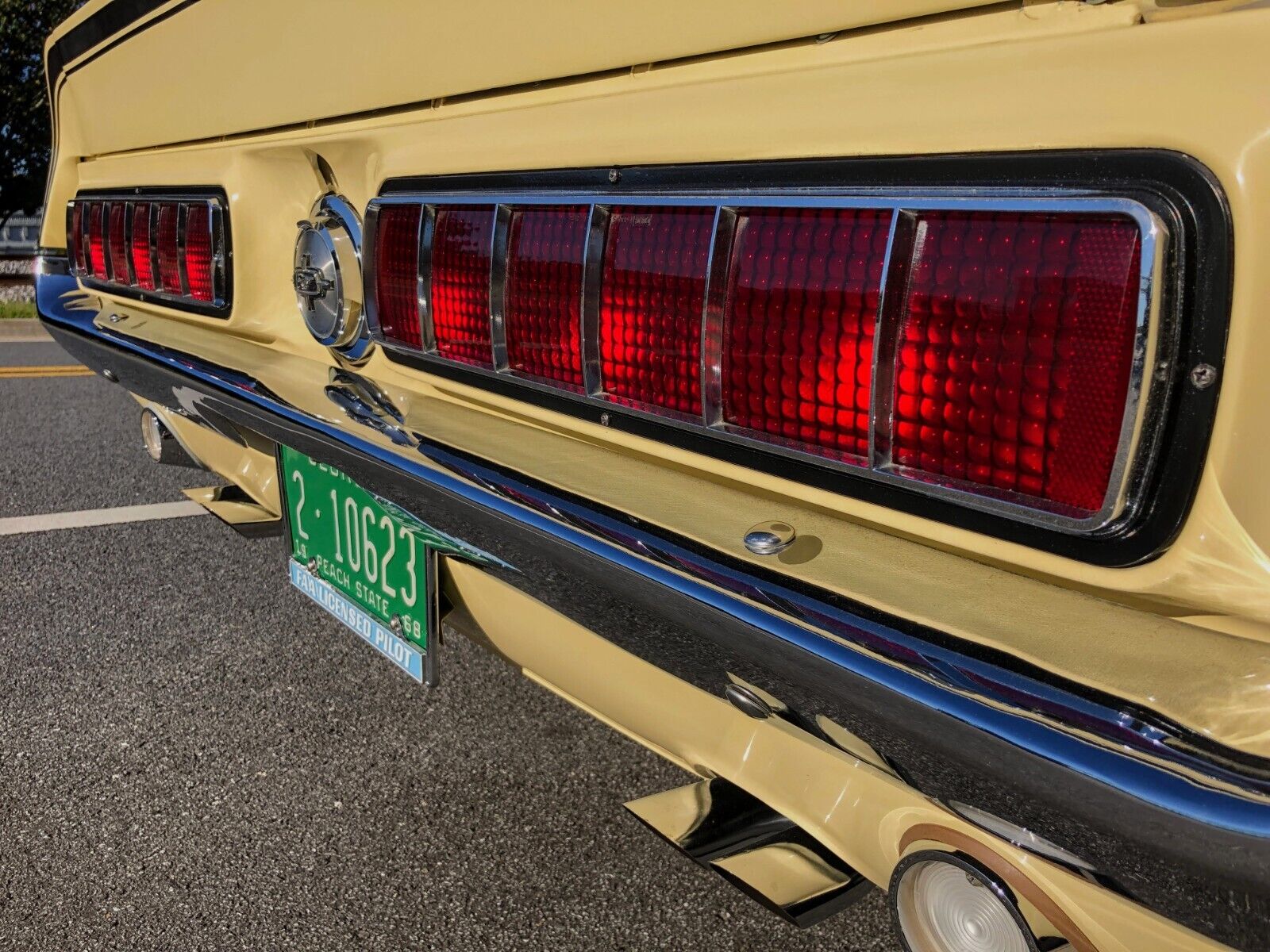 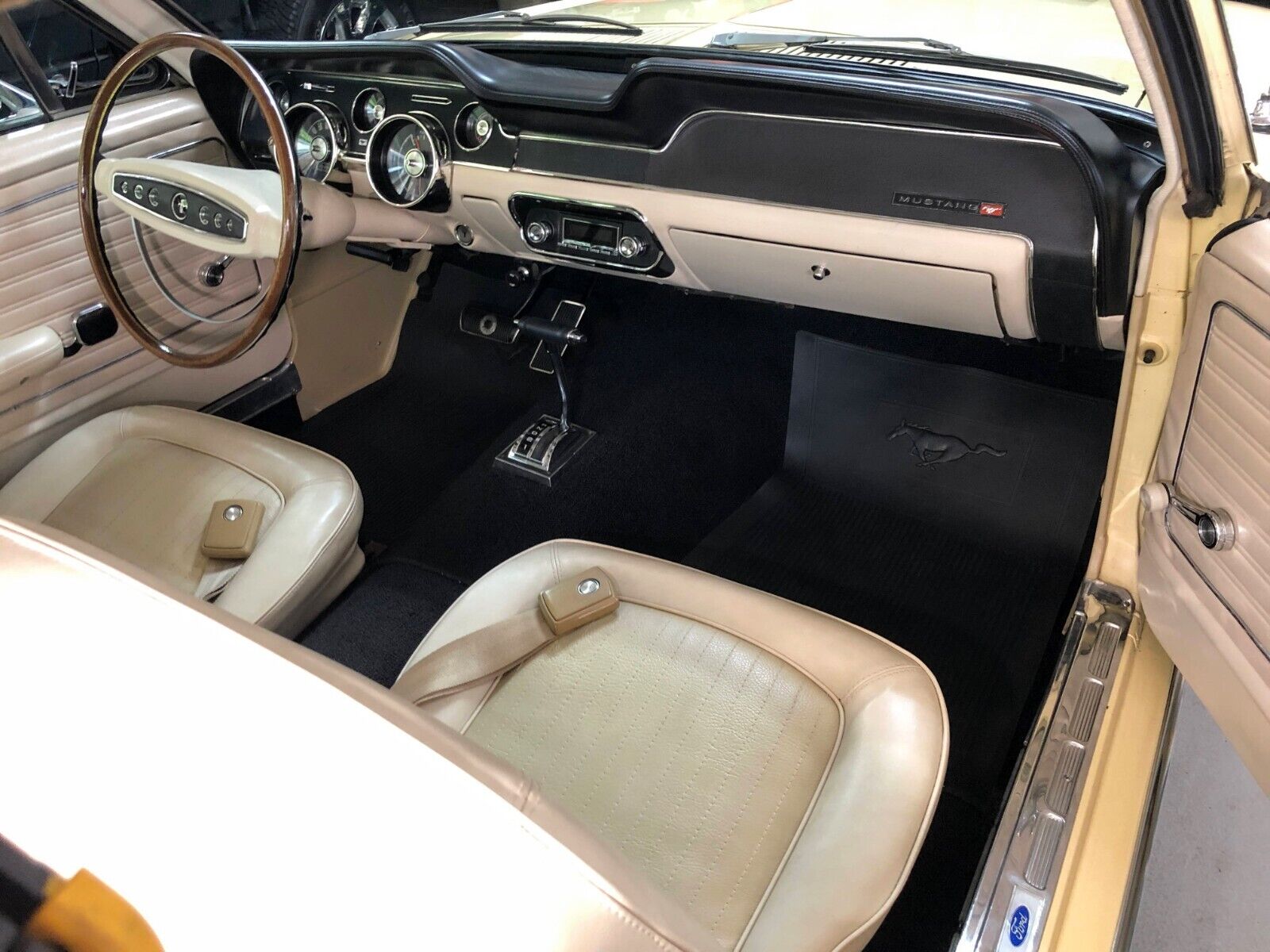 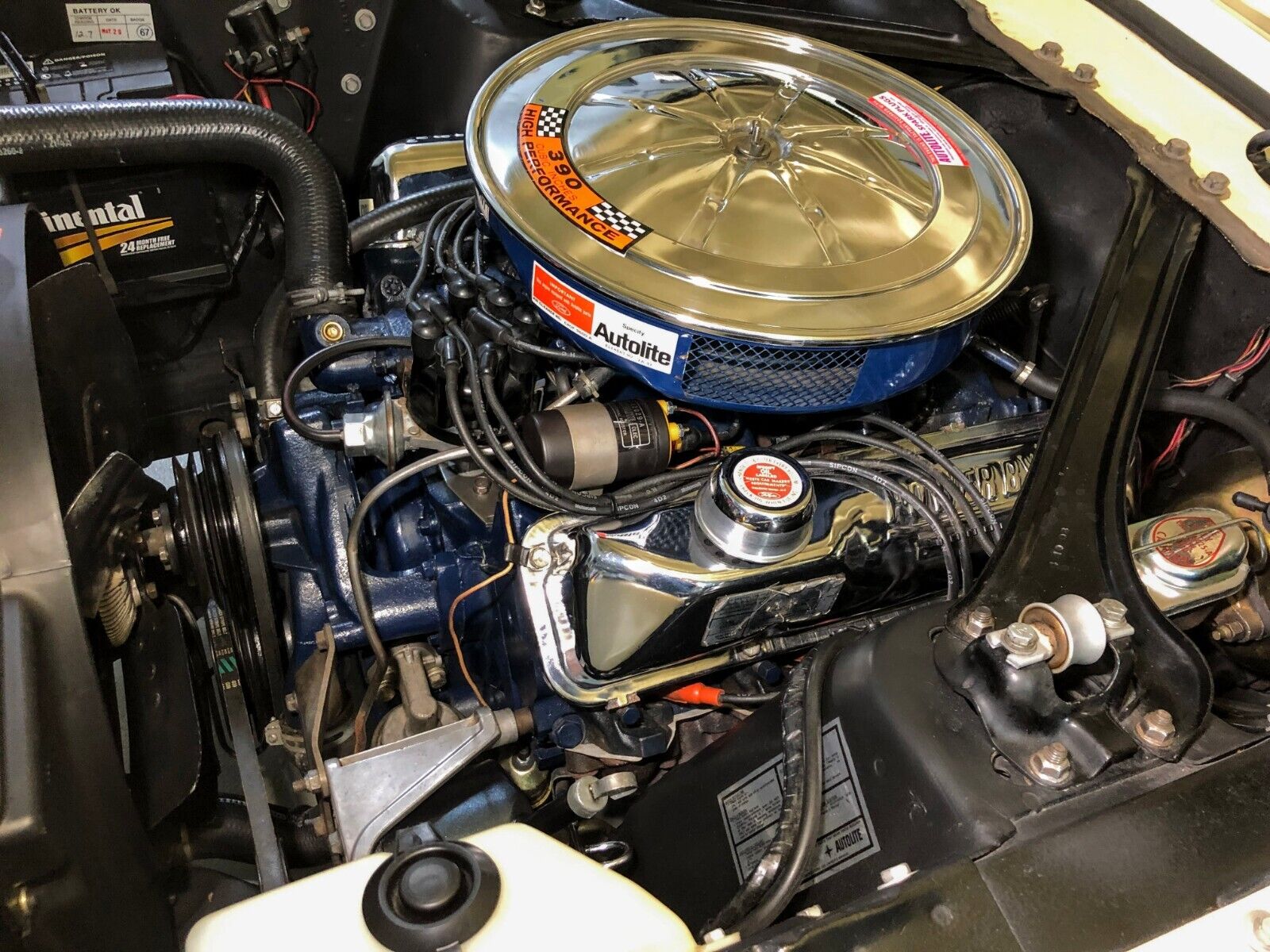 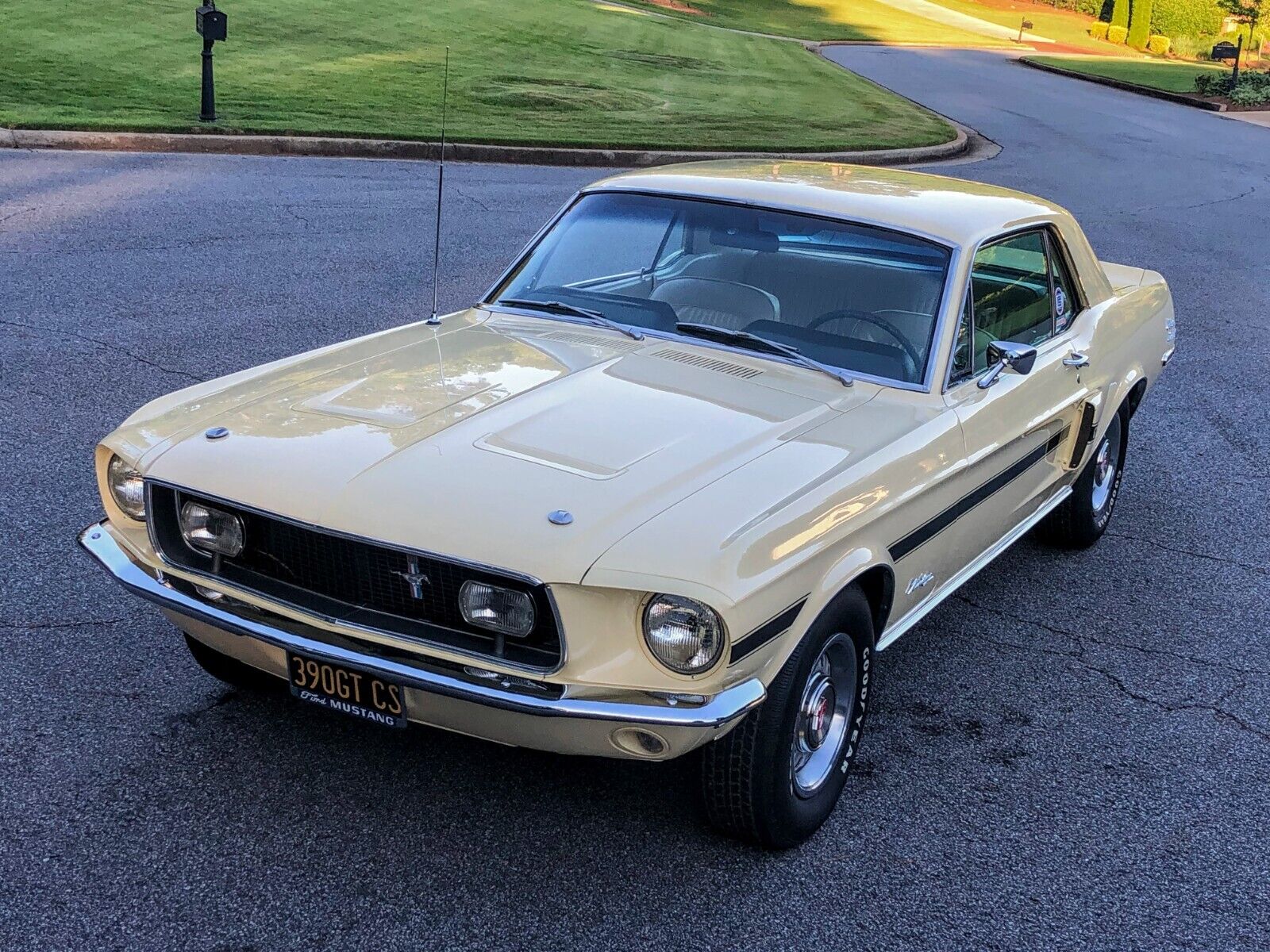 While there is more that could be said about this vehicle, the above already adds up to be one super rare, very desirable, well preserved, highly maintained, highly detailed, very unique, very original, super survivor muscle car with one respray, highly detailed and ready to take to shows or display. A fantastic SURVIVOR very original on many levels throughout with untouched factory original benchmark undercarriage, mint under dash plus original paint preserved in many areas throughout. You will be proud to display this beautiful survivor side by side with all the trailered concourse Mustangs and Shelby’s. And because it has outstanding original survivor qualities, this 390GT/CS will provide benchmark qualities that the restored cars have to be measured against for correctness.

VEHICLE HISTORY-Built on May29, 1968 and delivered to -Sutton-Brock Motor Co a Ford-Mercury dealer in New Mexico. Appears upon the availability of the GT/CS option outside of the CA sales district that the dealership special ordered this Mustang which closely replicated the Shelby-Ford SCCA Trans-Am winning race car plus its GT390 High performance drivetrain as a promo vehicle. 1st original owner Sept 1968-’80 New Mexico (12yrs): 2nd owner 1980-’82 Colorado Springs (2yr): retired couple who recognized it as a very special collector Mustang at the beginning of the Mustang show and collector craze purchasing this 390GT/CS with the expectation to show it. They treated the GT/CS to a quality exterior respray & detailed it for show while preserving as much of the originality as possible. An unexpected downturn in health forced its sale. 3rd owner 1983-2022 Missouri (39yrs) purchased by a serious Ford enthusiast / collector who collected Shelbys, Boss 2s & 9s and other special Mustangs & special interest Fords. The GT/CS was last registered in 1984 then stored away in a temperature controlled warehouse as part of his private collection for nearly 40 years. By his mid 80s, he decided to start selling his 40 year acquired collection. I am the 4th owner of this amazing GT390 GT/CS. It is now registered and back on the road after a 42 year hibernation!

Under the dash area-Just like the undercarriage, it is untouched, looks perfect, benchmark perfect survivor and appears just like the day it left the assembly line with all the original factory finishes and part number tags! No cut wires, no cut dash, nothing molested, absolutely perfect!

Mechanicals-Engine runs flawlessly-very smooth and powerful. Always starts easy and runs cool. If you give it more than a gentle touch of the throttle from a standing start, you will be burning rubber. If you step on the throttle while rolling under 30MPH-you are burning rubber. If you step on it at 45 MPH, it jumps to 70 then 80 MPH quickly. It is a true ultra low mile S code GT390 date code correct with factory castings date code of 8C18 (8- 1968 C=March 18= 18th day in March) that perfectly corresponds to the mfg build date with correct part C8ME-A casting number indicating a true GT390 engine. But to be perfectly clear, while all the casting and date numbers match the car build dates and options, the motor is not the factory installed origianl motor. The C6 transmission shifts perfectly, will chirp and burn rubber into 2nd gear under acceleration, and appears to be the original. The rear end is quiet, smooth, functions perfectly and appears original. Brakes work perfectly and stop straight and have been gone through with a new power booster and master. Steering is very tight with no play at all. When I purchased the GT/CS it still had its original shocks on it which are now in a box with new shocks installed. Every item I can think of down to the smallest item such as back-up lamps functions flawlessly. All the switches, window mechanisms, turn signals, locks, etc just operate like new on day #1. This car is just a joy to drive and is as close to driving an original 1968 GT390-4V 325HP with 427 FT-LBS of torque Mustang off the showroom floor as you will ever find.
OP
OP

NEEDS:The only mechanical need I am aware of is that the trans will sometimes leak fluid when parked. Sometimes it won't, so having it gone through is recommended. The tires hold air 100% perfectly, look good, and have great tread but are around 30 years old with flat spots from its long term storage.

Radio-I upgraded the stock AM radio to a new retro AM/FM radio that looks factory stock plus has bluetooth capabilities with external mic & aux capabilities. (Comes with the original FoMoCo AM radio that was in the car when I got it)
BOTTOMLINE- This is NOT a 100 point flawless rotisserie restored concourse trailer queen car with zero miles. To me, it is way better than that because it is a well preserved 50+ year old survivor having escaped the raveges of time making this a very impressive vehicle on every single level. It is a vehicle with incredible survivor qualities that is rarely found that can stand tall when compared to a flawless restored $100K rotisserie Mustang or Shelby. It is very nicely detailed, very original in its appearnce, and I personally would consider it very show worthy. It is a beautiful survivor and nice enough to be displayed with mirrors under it, hood / doors / trunk all open to display its amazing originality that includes the patina gathered from time and use. This all of course is my personal opinion so in-person and professional inspections during the auction run time are a must as this vehicle is over 50 years old and there is no warranty expressed or implied and it is not being sold as a perfect car but a well cared for 50+ year old survivor type vehicle with its flaws. I believe all the information stated to be correct but it is up to the buyer to verify for himself as it is sold as is. I will make the 390GT/CS available at your convenience for inspection.

NOTE: I may end this listing at anytime as I will have vehicle listed locally for sale or I may choose to not sell it as circumstances change.

It’s definitely been repainted. Not entirely sure why the scripts don’t align.

Judging by the seller's past types of sales and buyer's comments on what he has sold in the past, it looks like he's dealing with an unfamiliar commodity and thinks he has discovered the Holy Grail.

You must log in or register to reply here.